Maybe I’m a bad Beauty and the Beast fan, but I haven’t seen the 2017 Disney remake of Beauty and the Beast. I will at some point but it will probably be on DVD. I have nothing against Emma Watson and Dan Stevens but they’re not Belle and the Beast to me. I wasn’t impressed with their singing on the soundtrack. And frankly it’s not Disney’s Beauty and the Beast without Jerry Orbach and Angela Lansbury. I may change my mind when I see it but from what I’ve seen so far (trailers, behind the scenes features, clips etc)  I’ve been unimpressed.

But there are a lot of Beauty and the Beast retellings on film that I feel are well done and worth a watch:

This French masterpiece directed by Jean Cocteau is surreal, dreamlike, lavish, and seductive. While it implores us in the begin to watch the film through childlike eyes, it’s tone is actually more mature than one might expect. 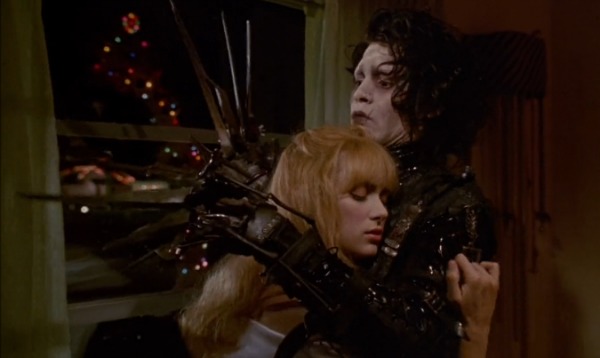 Tim Burton’s film features a lot of common images; the gothic castle, the angry mob… These are archetypes. But they’re contrasted with a very generic suburban setting that in it’s own way is weirder than anything happening up in the Inventor’s hilltop castle. At the same time we do feel a strong emotional connection between Kim, a lovely high school girl, and Edward, the boy who was invented by an old man who died before he could give his creation hands. As a result, the kind hearted Edward is more dangerous than he intends to be. It’s hard not to feel a bit choked up when Kim says “hold me,” and Edward simply says “I can’t”.

Disney’s animated musical adaptation featured singing tea pots, dancing candlesticks, and it worked. I always catch my breathe a bit when the Beast and Belle enter the ballroom and dance, as Angela Lansbury’s voice sings of a “Tale as old as time…”

This film is one of the few Beauty and the Beast stories to feature a gender reversal. Penelope is born with a pig nose as the result of a family curse. Unless she is loved by “one of her own kind” it will never break. Her wealthy parents try to set her up with boys from wealthy families (her own kind) without luck. But when a young heir disowned by his family is brought it, there is a sense that things might be different. It’s never that easy though, and Penelope leaves the shelter of her family home and ventures out into the world. She does find love, but one of the most important things that she learns is that “it’s not the power of the curse, it’s the power you give the curse”

At it’s worst, this Korean film features a villain who might as well twirl a mustache and carry a pitchfork. At it’s best it’s lovely and haunting.  Sun-yi and her family move to the country in `1965 so that she can recover from an illness in the fresh air. She meets Chul-soo, a feral boy she finds in her backyard. Chul-soo has a 46 degree Celsius body temperature and an unidentifiable blood type. He can’t speak, and has inhuman strength. It’s presumed that he’s one of the 60,000 children orphaned in the Korean war. Chul soo isn’t a werewolf, or if he is, it’s never stated explicitly. But his behavior can be seen as that of a beast. But a beautiful one.

This visually stunning French film gives the Beast a backstory that I wasn’t overly fond of, but it’s worth seeing for other elements, including the complete embrace of a fairy tale world. I also liked the relationship between Belle and the rest of her family here.

3 thoughts on “Beauty and the Beast Retold On Film”

I'm usually more of a panster (as in I don't do much planning, I "fly by the seat of my pants" for those unfamiliar with writer lingo) but about 5 drafts into my WIP I decided to outline everything I have. I want to make sure that the story is balanced, and every scene serves its purpose. I find it most helpful to do this after I've written the book, because then I have something to work from. But as I begin to think about my next project, I'm considering more advance planning than I've done in the past.
Found this randomly (wish I could credit someone) but it made me smile.
It #WhattoReadWed. I'm not normally a huge poetry reader. I like poetry, I just don't usually make it a priority reading-wise. But I am a fan of Margaret Atwood generally, so I definitely wanted to check out the first poetry collection she's released in over a decade.
My book club had a book swap yesterday. I brought 16 books to the swap and disciplined myself enough only take 4 new ones home with me. That leaves 12 empty spaces on my shelf just waiting to be filled with new books!
I prefer to feature lesser known books on here, but it seems like when I read something good, I want to share it for #WhattoReadWed regardless of how popular it may already be. Such is the case with The Ten Thousand Doors of January.
Recently had a chance to see the @nyclassical production of King Lear. The outdoor production used Nathan Tate's 1681 adaptation that gave the story a happy ending. This version of the play was performed almost exclusively until the 1840s. It was definitely interesting seeing Shakespeare's tragedy end well (for the good guys at least!)
We are a participant in the Amazon Services LLC Associates Program, an affiliate advertising program designed to provide a means for us to earn fees by linking to Amazon.com and affiliated sites
Loading Comments...
%d bloggers like this: