This week’s topic was: 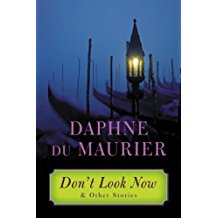 1. Don’t Look Now by Daphne DuMaurier- This story features a lot of creepiness in under 50 pages. There’s a slow building sense of dread as a married couple, who have recently lost their daughter go on vacation in Venice and try to start anew. We have the sense early on that their misfortune isn’t over yet and we turn out to be very right. Then Venetian setting is gloomy and Gothic and the bereaved parents make sympathetic protagonists. There are several threats ranging from a serial killer to some weird psychic sisters, but the most dangerous threat may be what the protagonists can’t (or won’t) allow themselves to see.

2. The Bloody Chamber by Angela Carter- Angela Carter is known for her feminist take on classic fairy tales. In this story she takes on one of the creepiest fairy tales out there: Bluebeard is sort of deliciously Gothic to begin with: a girl marries a man who gives her the keys to all the rooms in his grand house, and tells her not to open one door. Of course she opens it, and she finds something very disturbing in there. This story has a creepy setting (a vast, decadent mansion/castle), a nasty villain, and lots of blood.

3. The Grown-Up by Gillian Flynn– This is the rare short story that was published as a stand alone. And it does stand on its own. We have a character who poses as a psychic is out to make a quick buck off a family who thinks they’re being haunted. She discovers that they are (in a sense) right, and that she may never be free of them. In some ways this is an homage to the Victorian ghost story, but Flynn gives it a contemporary twist.

4. The Landlady by Roald Dahl- You can see some of the creepy villains from Dahl’s children’s stories in the title character of this short story. She’s less over the top than some of the stuff that Dahl writes for younger readers but she still makes your skin crawl in a really primal way. I read somewhere that this was Dahl’s attempt to write a ghost story but it didn’t quite come out that way. IMO that’s fine, because it’s plenty creepy as it is!

Tales of the Unexpected episode based on The Landlady from 1979

5. The Bus by Shirley Jackson- I almost went with “The Lottery” which is Jackson’s best known short story but I find this one more “halloweenish” (and yes, I made that word up). It’s about an older woman who gets off the bus at the wrong stop and ends up somewhere somewhat familiar but very twisted. Another story that I almost chose was “The Summer People” but that also didn’t seem quite right for Halloween. But many of Jackson’s stories are thematically suitable.

6. The Truth is A Cave in the Black Mountains by Neil Gaiman– This story was originally published as part of a collection and later performed before a sold out crowd at the Sydney Opera House in 2010 where Gaiman read the tale live as illustrator, Eddie Campbell’s, artwork was presented on large screens and accompanied by live music composed for the story and performed by the FourPlay String Quartet. But even if you just read the story as a story, its unsettling in its portrayal of greed and revenge. Fortunately the story is available with Campbell’s beautiful artwork. 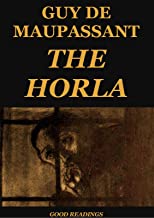 7. The Horla by Guy de Maupassant– I read this in a college French class (it’s available in English though!) and I was really unsettled by it. It’s written as journal entries of a character who sees a boat and waves at it. The boat in question has recently arrived from Brazil and the man realizes that his wave may have inadvertently been taken as an invitation by something on that boat. As the narrator becomes obsessed with this thing that may have invaded his home, his body and his life, we begin to doubt his sanity. The fact that Maupassant was committed to a mental hospital about a week after finishing it, makes it even creepier.

8. Where Are You Going, Where Have You Been by Joyce Carol Oates- This story is really creepy in a way you don’t expect. Oates said it was inspired in part by serial killer Charles Schmid, who preyed on teen girls. But the focus isn’t really on the presumptive bad guy, Arthur Friend. Rather it’s on Connie, a rebellious, self absorbed teen who knows Arthur from a local restaurant. He seems nice enough when he shows up unexpectedly at her house one day, with his friend Ellie.  In only a few pages Oates takes us from Connie’s initial flattery at Friend’s attention, to her growing unease and outright fear as she comes to believe that she has no choice but to do what Friend tells her. As a reader, we can see how Friend preys on Connie’s naivete and vanity. It’s a reminder that the most frightening monsters often comes disguised as friends (pun intended) and the most harrowing journeys often take place in a single location in only a few minutes time.

1985 Film Smooth Talk based on the story

2014 short film Dawn based on the story

Wishing a HAPPY HALLOWEEN to all!