The other day, I was watching a movie and a character referred to himself as a “failed author.” In the context of the film, it was clear that he meant that his book hadn’t sold well. But it got me thinking about what “success” means as an author. After all, my book isn’t exactly topping the best seller lists. Does that make me a “failed author”? Considering the fact that when I published Beautiful, I expected to sell about three copies total, I’d say no. I don’t know what the character in the movie was expecting or hoping when he published his book: it was never made clear. But when I decided to publish Beautiful I was very clear about what “success” would mean to me with this book: if people (any number of people) read the book and got some enjoyment out of it, I would consider it successful. I’ve gotten some really nice feedback on the book. More than I expected! It’s encouraged me to move forward with publishing a follow up and building a career. So in that sense, I absolutely consider myself a successful author. 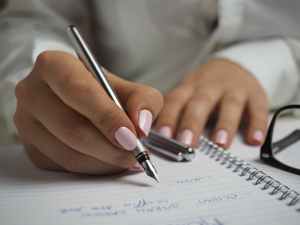 Photo by energepic.com on Pexels.com

But let’s rewind a moment: before I published Beautiful, I had seen writers in books and films say similar things about their books quite frequently. Even then I would roll my eyes a bit at it. These people had not only had the stamina and dedication to sit down and write a book (and  presumably edit and revise and rewrite it) but they had the confidence and perseverance to publish it. That in itself is a win! A lot of people say they want to write. Of those very few make it through the first draft. At each stage a lot of people give up. I would say that people who have the perseverance to write a book, and the courage and confidence to publish it, are successful regardless of whether it sells a single copy!

In fact, book sales are a fairly arbitrary indicator of success. Yes, having money is nice, I certainly don’t deny that! But how many brilliant writers throughout history sold very few copies of their work during their lifetime? Even my own criteria for success don’t hold up under that lens: many great authors were mocked and derided initially by readers and critics and only appreciated by posterity.

Given the fact that popularity and monetary rewards aren’t always indicative of success as a writer, the only way that a writer can be assured of a chance of greatness some day is to finish that book, and publish it so that people can read it. Maybe it’ll sell a million copies when if first comes out, be made into a forgettable movie and make the writer financially comfortable for the rest of his or her life. That’s certainly a kind of success. Maybe it’ll sell a few copies but be loved by readers and inspire future work. That’s a  kind of success too. Maybe it’ll be enjoyed by those who read it and then forgotten as they move on with life. I’d argue that’s success too. It might be helping those people as they struggle with something. It may take them away from their trouble for a few hours. To me, that’s success regardless of whether or not its remembered later.

I would argue that the only way to fail as an author is to not write and to not let people read what you’ve written. That’s the only way that it has no chance to make an impact. But if you write, and you share your writing, then you’re successful, whether or not you recognize it.

7 thoughts on “What Does It Mean To Be A Successful Author?”

Took a lovely walk through Central Park's Shakespeare Garden this morning. Located near the Delacorte Theater (where Shakespeare in the Park is performed) it features four large planting bed with various flora and fauna mentioned in Shakespeare's work. When you think about it, that's a lot of flowers! Quotes from the Bard are included on bronze plaques.
I've been having excellent luck with goodreads giveaways lately. I just won this ebook by @byrd_nash and I'm so excited to read it!
I'd read Mrs. Frisby and the Rats of Nimh about a million years ago. I didn't remember much about it, but I do recall being a bit frightened of the titular rats. I reread it for work recently and was surprised to discover that the rats in question weren't at all scary. On the contrary, they're kind and helpful. I can't imagine what might have once frightened me about them other than the fact that they're rather secretive (with good reason)
Won this is a goodreads giveaway a few weeks ago, and the book arrived today. It looks like a nice comfort read, which is always needed!
I got this book out of the library a few days ago. When I opened it just now, some wedding pictures fell out. No idea whose these are, but I'll put them back in the book when I return it. Just in case someone is looking for them.
For the past few months I've had the opportunity to work with @parrotcletestudios
We are a participant in the Amazon Services LLC Associates Program, an affiliate advertising program designed to provide a means for us to earn fees by linking to Amazon.com and affiliated sites
Loading Comments...
%d bloggers like this: